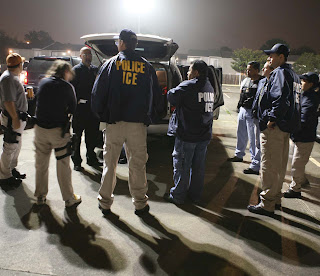 “A top priority for ICE has been to target the “worst of the worst” in the illegal population—criminal aliens incarcerated in U.S. prisons and jails; those who may pose a threat to national security or public safety” ICE Annual Report FY 2008

Sounds reasonable, right? Of course Immigration and Customs Enforcement (ICE) should ensure national security and public safety by deporting criminals. No wonder the Homeland Security Committee allocated $180 million to this program in 2008 to ensure that incarcerated non-citizens are deported.

However, a new report from the UC Berkeley Law School finds that ICE “is not following Congress’ mandate to focus resources on the deportation of immigrants with serious criminal histories.” Instead, it is encouraging local police to engage in racial profiling and to arrest and deport people who engage in minor infractions of the law such as kicking over traffic cones or public urination.

Racial Profiling? Under the Criminal Alien Program, local police have the authority to call immigration on anyone who they suspect to be undocumented. Turns out that Hispanics are the ones police are most likely to suspect are undocumented. In a study of arrest patterns in Irving, Texas, the UC Berkeley Law School found that 96% of the people held under this program were Hispanic. Moreover, police were more likely to arrest Hispanics for minor offenses once the city began to participate in the Criminal Alien Program.

Not all Hispanics are undocumented. In fact, most Hispanics living in the United States are legal permanent residents or citizens. In Irving, Texas, however, once police began to co-operate with ICE, discretionary arrests of Hispanics for minor traffic offenses rose dramatically.

In 2006, ICE began a partnership with the city of Irving, which enabled ICE to investigate the immigration status of people held at the Irving Jail. Under this partnership, if Irving police arrest someone they suspect to be undocumented, they contact ICE to determine their immigration status. Of course, police officers can’t tell someone’s immigration status just by looking at them. In fact, in September 2007, of the 269 individuals Irving police officers referred to ICE, only 186 were turned over to ICE. The others were lawfully present in the U.S.

“Worst of the Worst”? Most of the people detained under the Criminal Alien Program in Irving, Texas were arrested for misdemeanors. In fact, only 2 percent were charged with felonies. The Berkeley report provides “compelling evidence that the Criminal Alien Program tacitly encourages local police to arrest Hispanics for petty offenses.” For example, in Irving, Texas, in April 2007, ICE agents began to offer 24-hour access to their services to the local police. Immediately thereafter, the rate at which Irving police arrested Hispanics for minor arrests began to rise. In April 2007, Irving police arrested 102 Hispanics for Class C misdemeanors. That number rose continuously until September 2007, when they arrested 246 Hispanics for Class C misdemeanors – minor offenses for which the maximum fine is $500.

It looks like the $180 million Congress appropriated to ICE is not enhancing public safety. Instead, it is encouraging local police to arrest Hispanics for petty offenses and deporting people for offenses as minor as driving with a broken tail light.

This study of one city in Texas resonates with work I have been doing with deportees in Jamaica and Guatemala. Deportees I have spoke with consistently tell me that they were stopped by police for a minor offense and subsequently placed in deportation proceedings.

A deportee I met recently in Guatemala told me this is exactly why he does not plan to apply for re-admission to the United States, even though his daughter still lives in the US. He does not want to live in a country where he will be arrested for minor traffic violations and hassled by police on a regular basis. Who does?
Posted by Tanya Golash-Boza at Friday, September 25, 2009

Welcome to my Blog!

Thanks for stopping by. I wrote this blog over the fourteen months that I traveled to four countries with my husband and our three children. As our trip has ended, I have decided to stop posting to this blog, but will leave it online for as long as I can.
I have not given up blogging, however. Instead of posting to this one blog, I now post to three. I welcome you to check the three new blogs out. They are ...
Weekly Tips on How To Succeed in Academia and Have a Life Too:
http://getalifephd.blogspot.com/
Stop Raids Detentions and Deportations!
http://stopdeportationsnow.blogspot.com/
Are We There Yet? World Travels with Three Kids
http://globetrottingmamita.blogspot.com/

Me and the Kids

With my three daughters at the Arch in Antigua, Guatemala